In this quarter we present cable protection projects, cable surveys, and business activities in many countries. For updated information and news, please visit our Facebook page that reached 6000 followers in March. We introduce IBAS Group as our representative in Southern and Central Africa. IBAS key operational management and staff are now formally fully qualified by Fire Security to evaluate and apply the FS range of cable protection solutions against fire, UV, and other environmental damages.

Meeting with MOL in Japan regarding fire protection on their LNG sea carriers.

January 15 – Paal Mathisen in JAPAN: I have been to Tokyo for meeting with MOL to present our latest project for their fleet of LNG sea carriers. I also traveled to Shimizu and got this fantastic view of Mount Fuji. 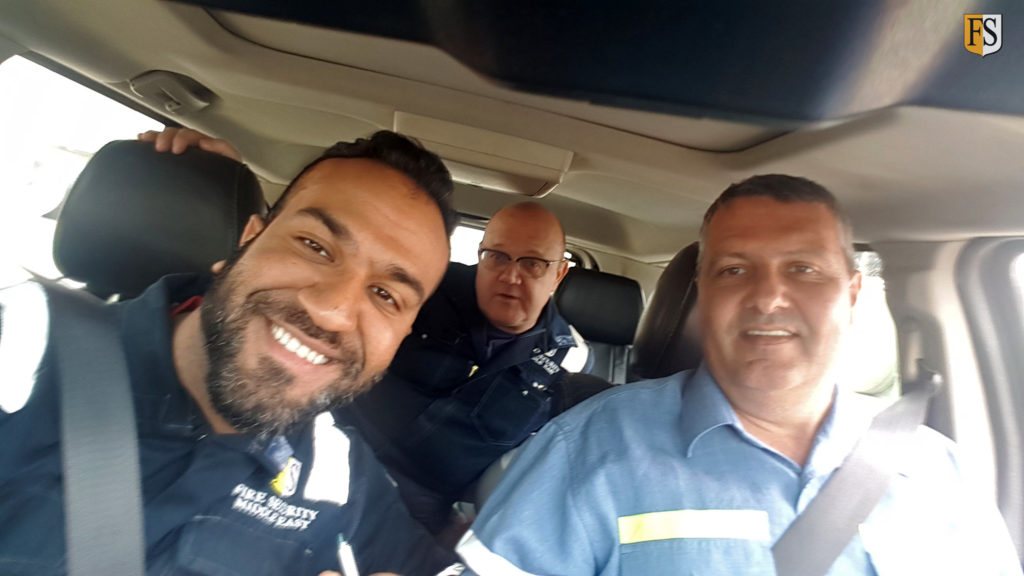 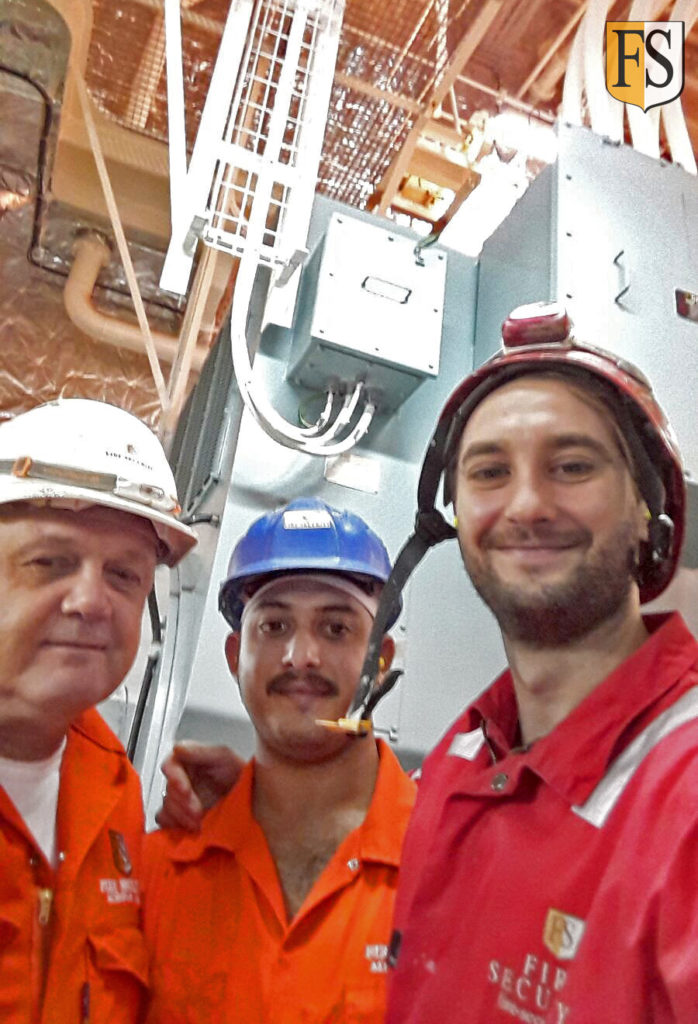 February 2 – Busy schedule for our Asia Manager: Been to BORNEO this week, home to the amazing Orangutan. Meeting with MLNG and Petronas Carigali gas division in Bintulu then move to Miri for the Petronas Carigali oil division. 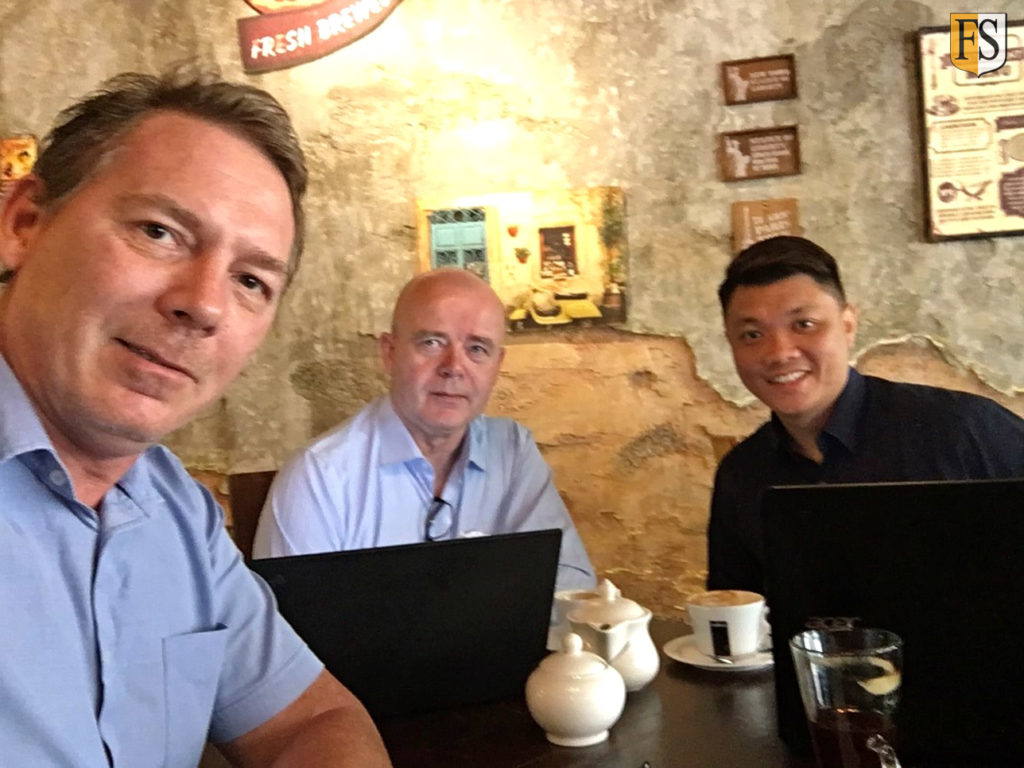 March 7 – Busy week in Brunei and Malaysia this week since the President of Fire Security has been visiting. Here with Tze Nian Lim from our Brunei agent PTT Engineering. 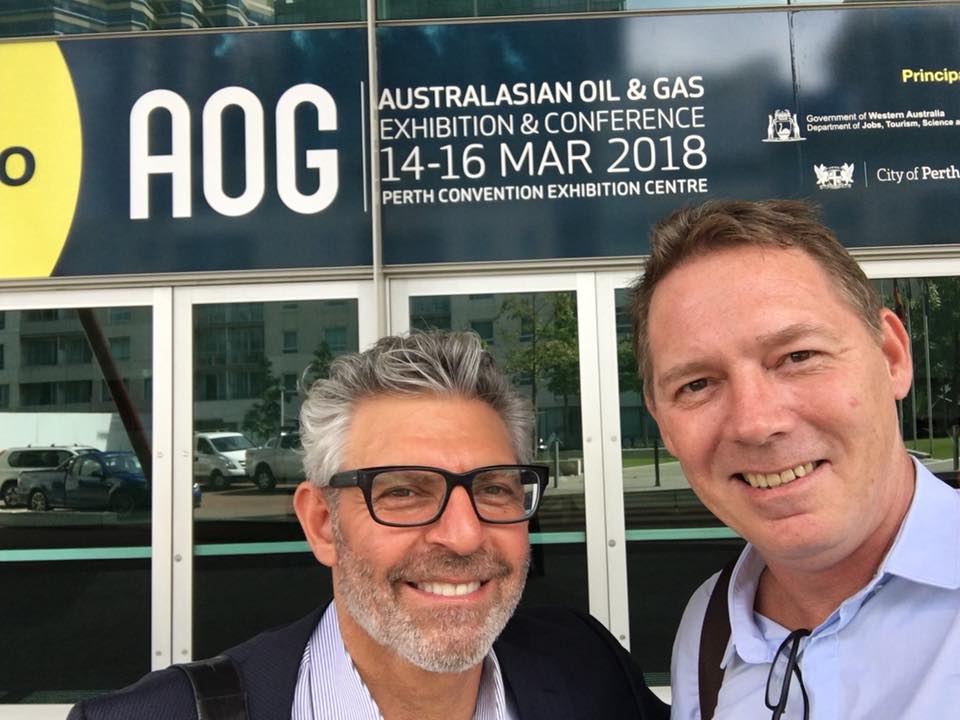 March 14 – Mark Hanna and Paal Mathisen are in Perth this week for the AOG and meetings with oil and gas operators in Western Australia. 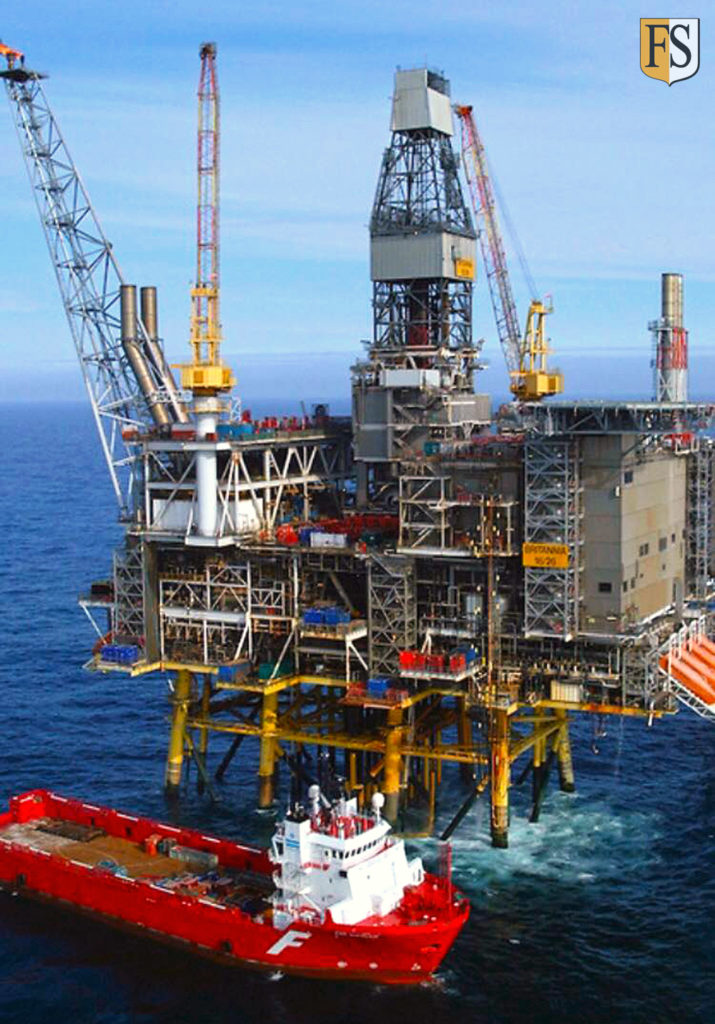 March 9 – HIGH VOLTAGE cable repairs WITHOUT SHUTDOWN. John Olaf Ryen and Jim Søllesvik successfully completed cable repairs on board the Britannia oil rig for ConocoPhillips in the North Sea. There was a huge concern that a shutdown was needed. This would cost millions of euros and loss of production. Due to the experience and knowledge from FS personnel Jim and John, there was no shutdown necessary and production could go along as normal, while they performed the important High Voltage cable repairs. 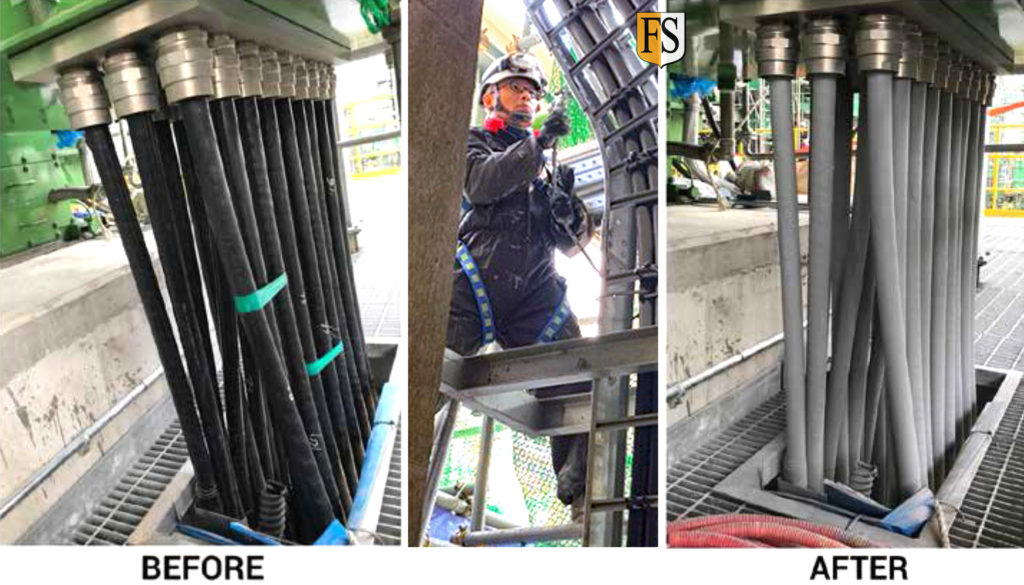 March 19 – Electrical cables are the nerve system of an industrial plant, especially so at a power plant, like this one in South Korea. These cables are just one example from the job our Project Supervisor Steven Chong finished recently.

Site survey at a cement factory in the Philippines. 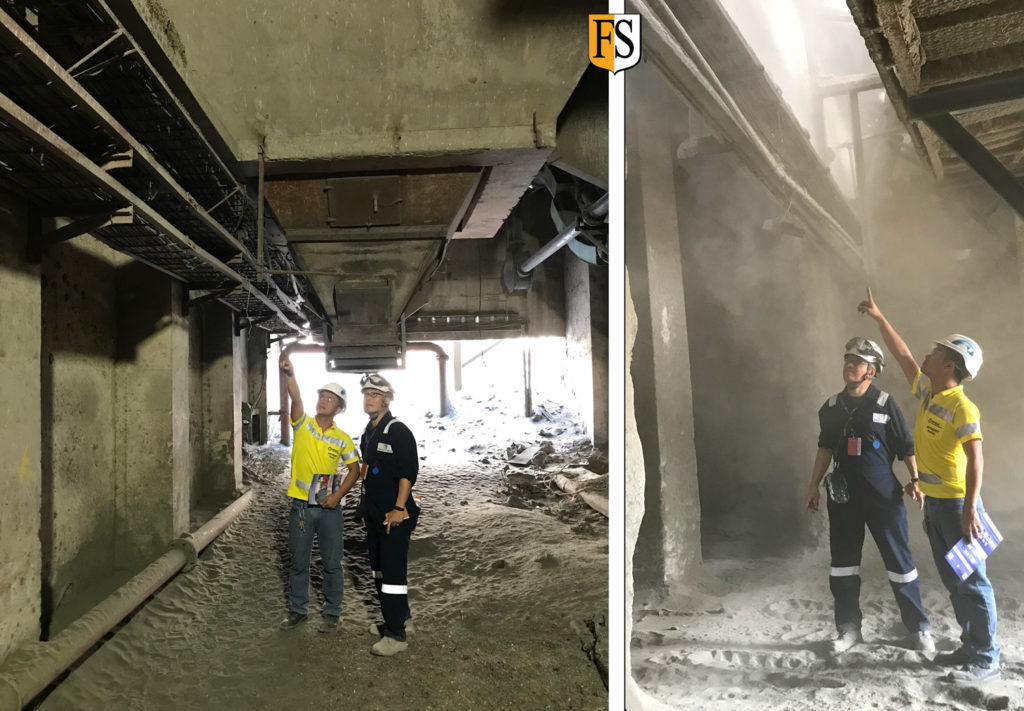 March 27 – Site survey at a cement factory in Manila. FS’s Steven Chong identified several fire hazards areas at the plant. Typically cement plants have a large number of heavy-duty electrical equipment used for distribution, control, and electric power utilization, so it is important to protect the electrical cables against fire.

March 28 – Paal Mathisen in VIETNAM. Today I have been offshore for JDC -Japan Drilling Company. We were asked to do a full inspection of cable condition on the rig Hakuryu-5 on anchorage in Vung Tau. Ready to board the crew boat with JDC H-5 General Manager Okada san. 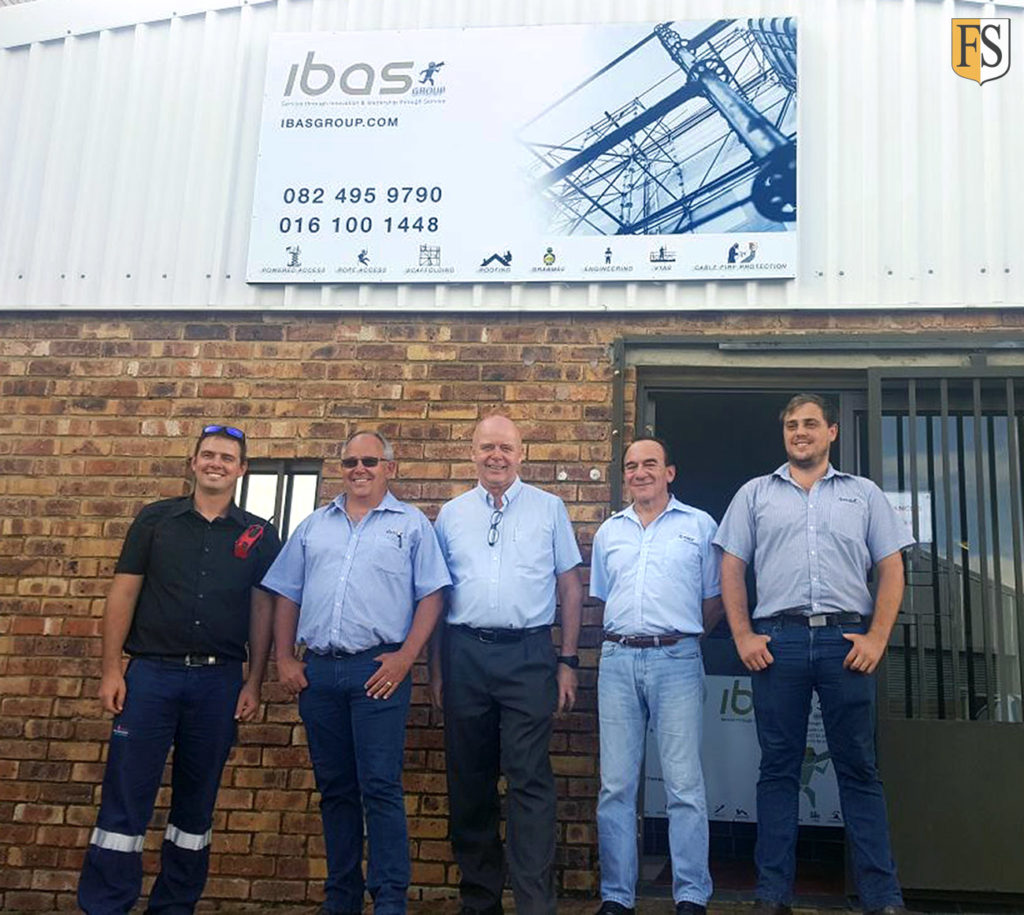 IBAS Group has steadily grown into its role of local Southern and Central African partners for Fire Security of Norway since commencing in January 2017. Executives from both companies regular travel to each others’ offices and sites – almost poles apart, North and South! IBAS is one of the first FS partners world-wide to protect the fibre-optic cable in an unusual project with newly laid cable, currently in progress. There are already 10,000s of metres of FS protected cable in South Africa, proudly supported by long term warranties. Inquiries and work come from the sectors as diverse as oil, solar power, mining, cement, and marine. 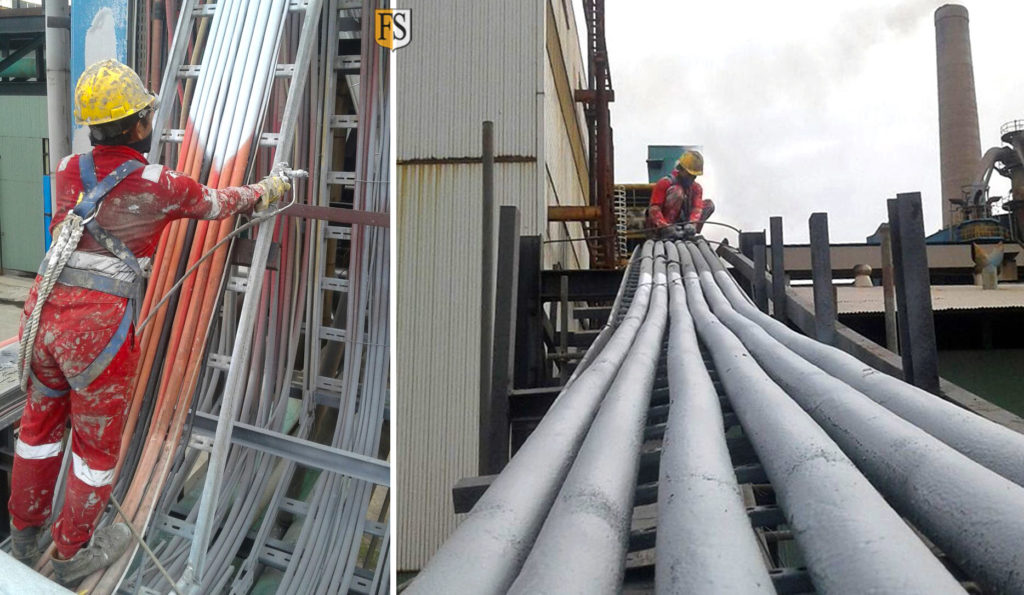 January 18 – Our Indonesia team has recently finished cable fire protection at a large factory. We sprayed 3000 meters of cables.

January 31 – Paal Mathisen reporting from JAPAN: I was recently invited by Mantle Quest Japan, the operator of Chikyu Scientific Drillship to inspect the condition of all cables onboard. This ship is used mainly for studies related to earthquakes and plays a very important role in Japan’s struggle to understand more about their earthquake sensitive location, in order to prevent future tsunami and nuclear power plant disasters. We did the survey together with our local partner KBK, Kyokuto Boeki Kaisha Tbk (Photo: Kenji Shimada – left, and Paal Mathisen).

Working towards the Australian oil-and-gas market. 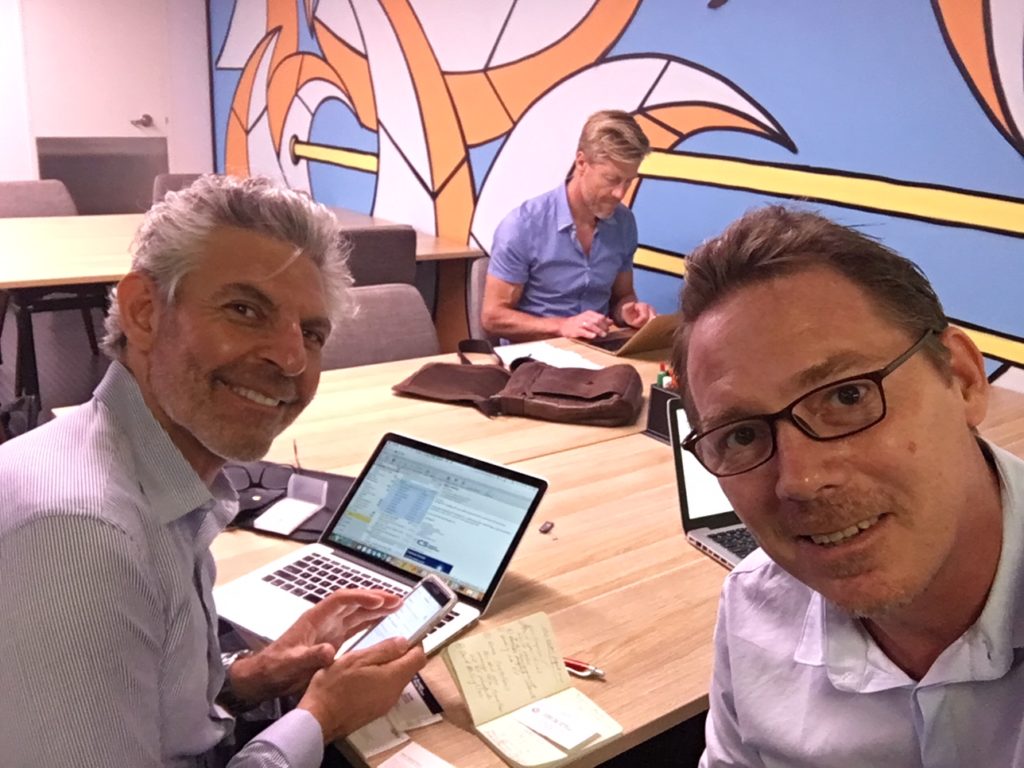 February 6 – Preparations are vital in order to reach our goal to increase our activities down under. Mark Hanna, Tore Moe, and Paal Mathisen. 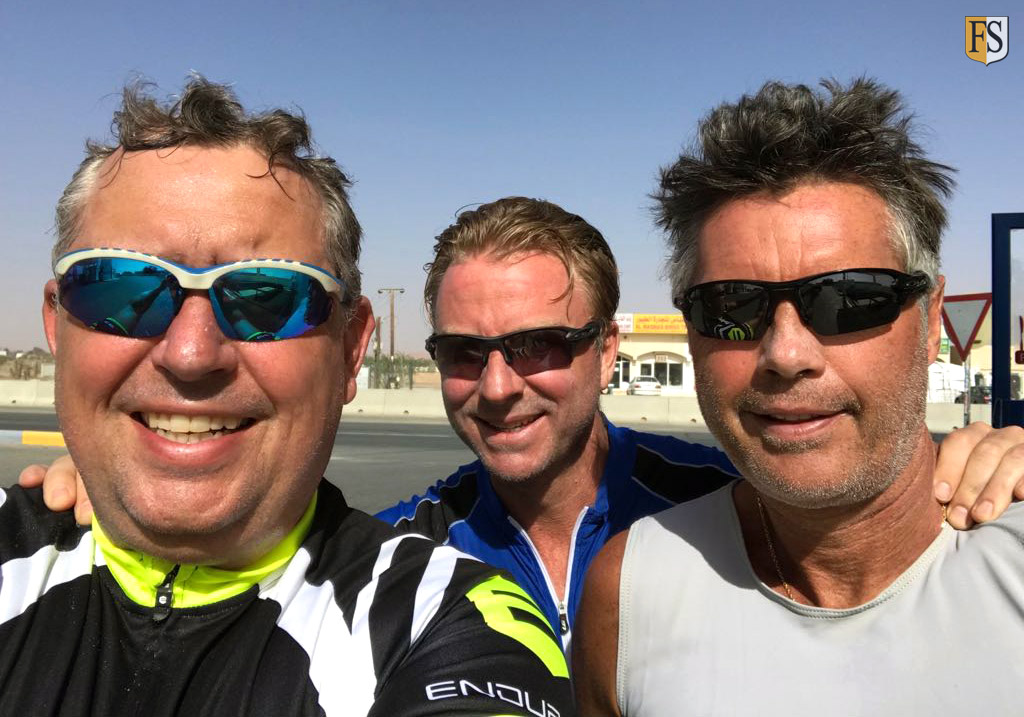 Cable survey at an industrial plant in Manilla.

March 28 – MANILA. March 2018 is the fire prevention month awareness and there is a growing focus on safety due to many fire incidents in industrial plants. After our survey at the cement plant we had a nice meal. From left: FS local partner Ms. Aida M. Padilla, Operations Manager, Ms. Cora De Jesus, Sales Manager, Mr. Almer Fulgar, Electrical engineer from Alco-Link. and Steven Chong, Project Supervisor at Fire Security Asia-Pacific.

March 13 – Offshore Western AUSTRALIA: Paal Mathisen has just conducted a cable life extension survey of Vermilion Energy’s Wandoo B platform offshore Karratha, Western Australia. Thanks to Matt Stichnoth for his involvement and for coming with me offshore. 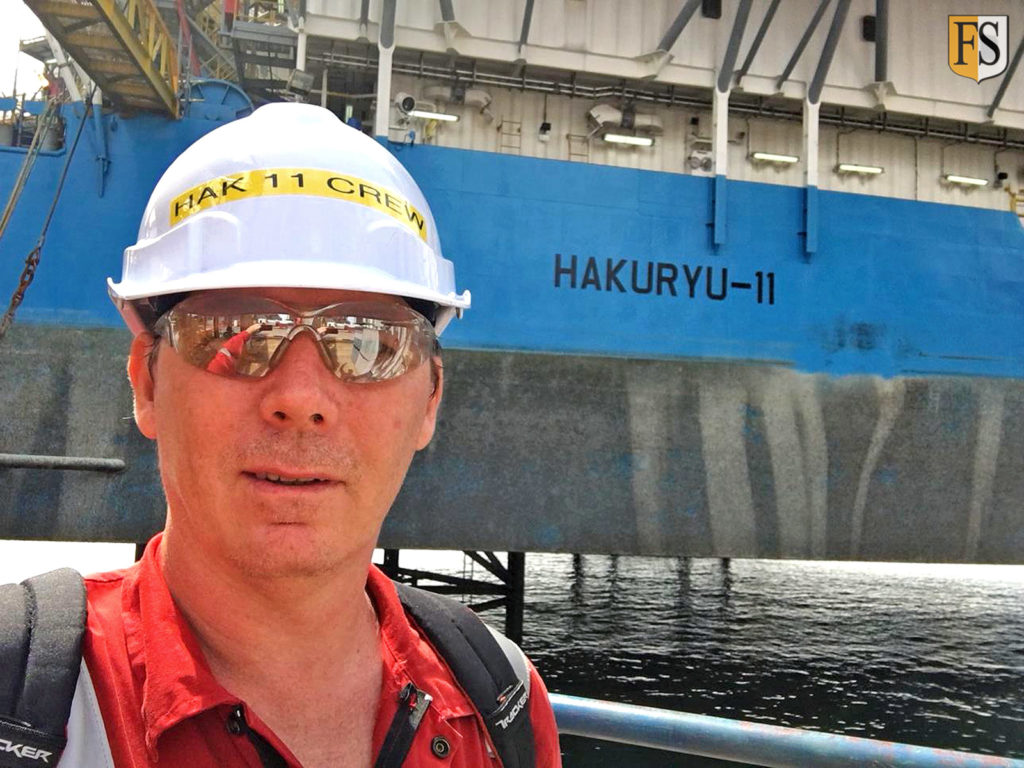 February 26 – Paal reporting from SINGAPORE: After successfully executed a cable repair and cable life extension job last year, Fire Security has been asked by Japan Drilling Company to survey two more rigs. I have just done a survey of the Hakuryu-11 Jack-Up rig in Singapore. 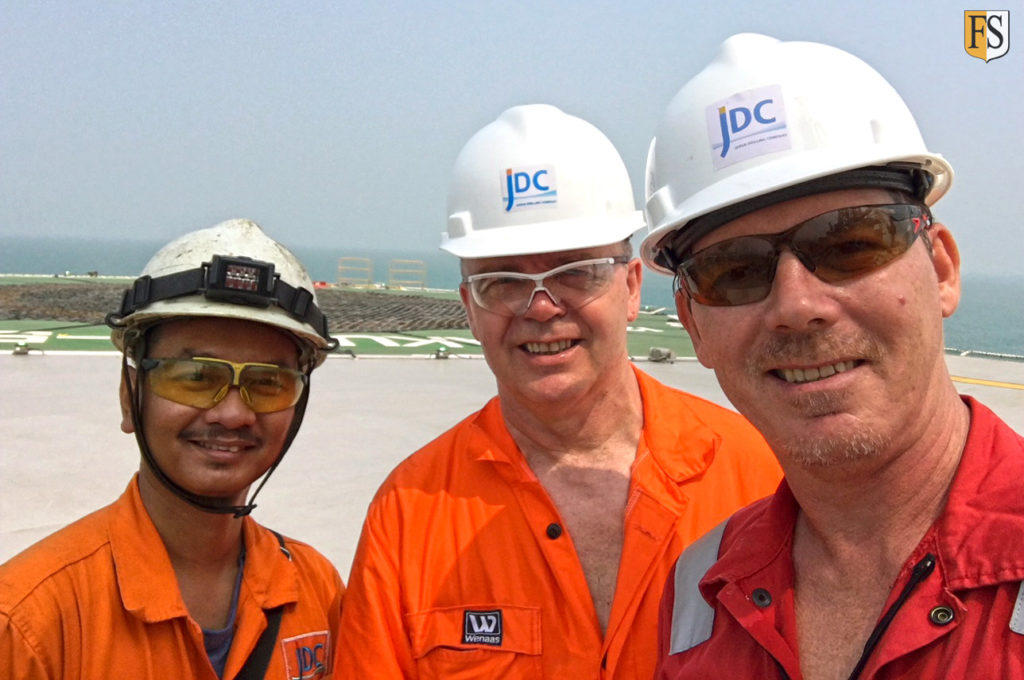 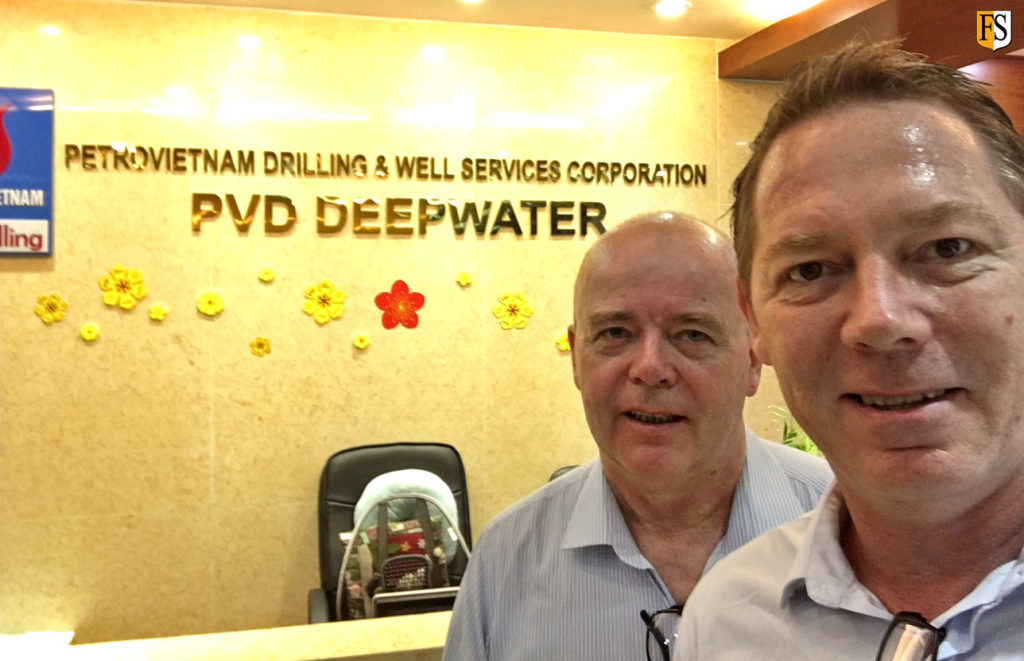 March 30 – Good Morning Vietnam. Back in Ho Chi Minh City. After the offshore survey in Vung Tau, we had an early morning meeting with Petrovietnam Drilling. Cables are important and that makes FS important, so we were instantly asked to survey two of their assets, one Jackup Rig and one Semi-submersible Rig. Looks like I am coming back here soon. 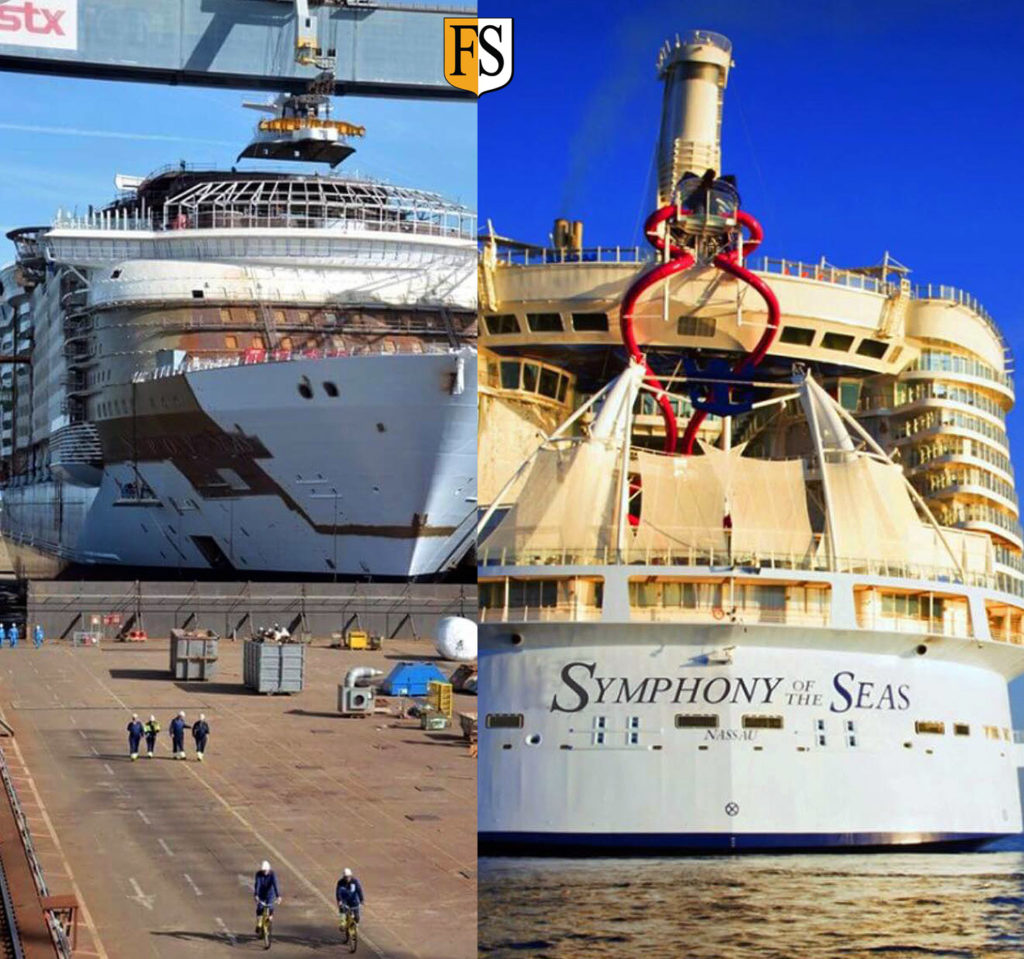 March 9 – BIGGEST EVER cruise ship. Mr. Marek Bober and his FS crew have completed cable fire protection onboard Symphony of the Seas. This is the world’s newest and largest cruise ship, weighing 230 000 tons, and more than 5 of these tons are Fire Security coatings that have been applied in high-risk areas all over this magnificent ship at STX Shipyard in St. Nazare France. 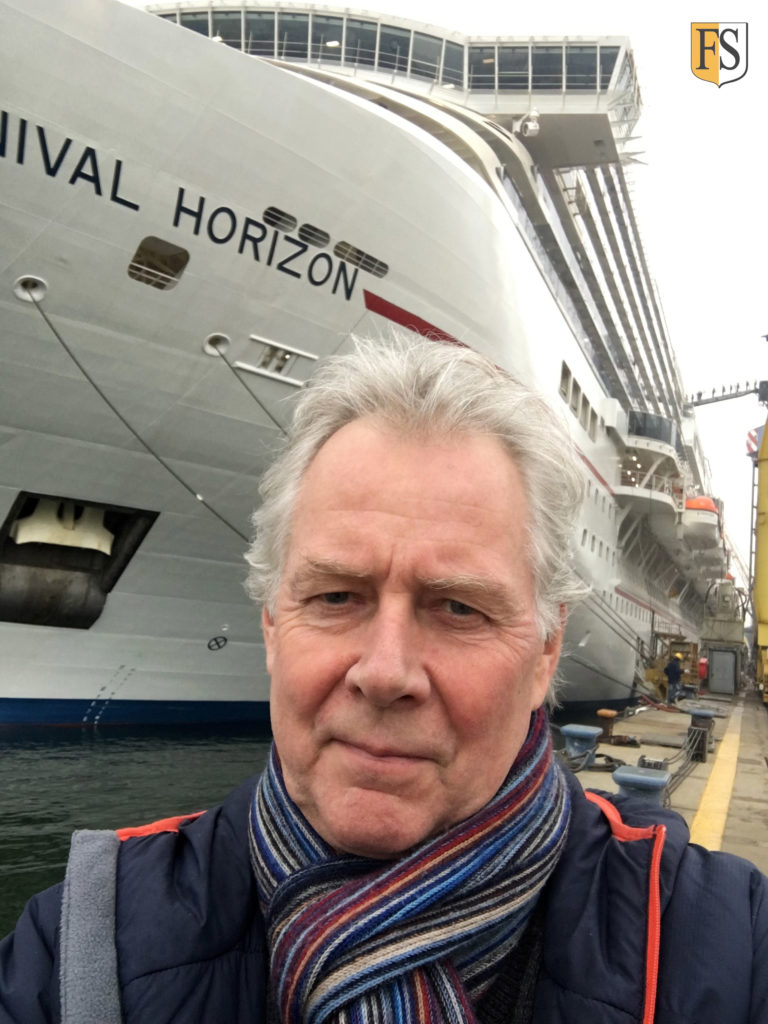 February 1 – Terje Waage in ITALY: Our next fire protection project starting 2 weeks from now is “Carnival Horizon” being build at Fincantieri shipyard in Venice. Horizon is the fleet’s 26th and largest vessel – together with the sister-ship Carnival Vista (2016). Horizon is Carnival’s “the most family-friendly ship”.

March 21 – Johnny Ryen, Piotr Bober, and Zbigniew Bober are working onboard the Le Soleal for Ponant cruises. They started the project in Uruguay and will complete it when they arrive in Brazil later this week. Ponant sails under the French flag and is based for upper-class customers, who are searching for the extra luxury on their vacation cruise. 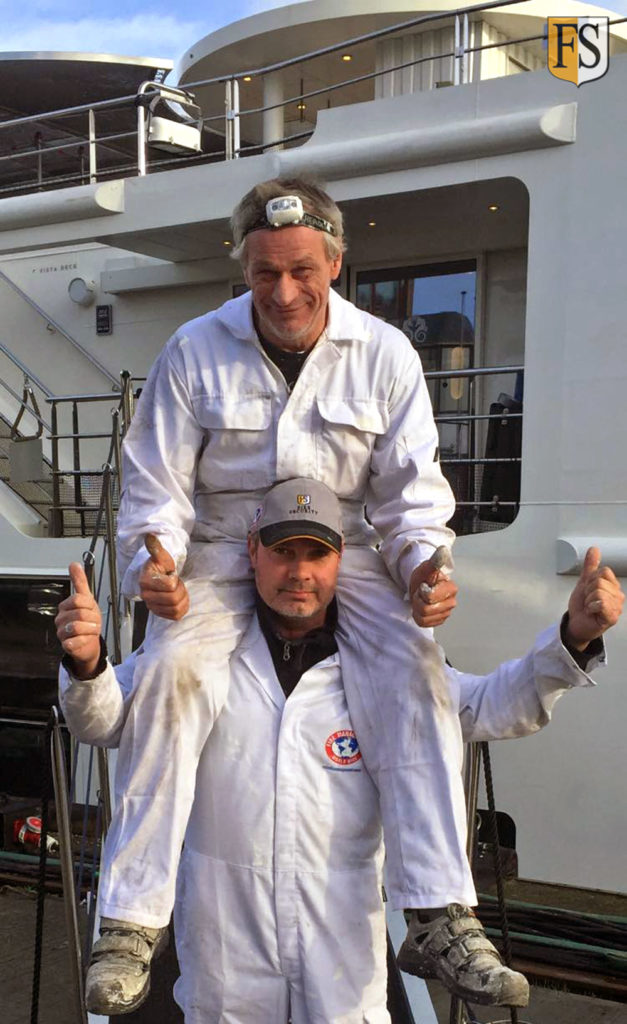 January 19 – Fire Security’s highly skilled crew Johnny Ryen and Hans Olsen is in Grave, Netherlands. They are carrying out a project for Crystal River Cruises. Later this week they will travel to Linz in Austria to fire protect another vessel for the same company.